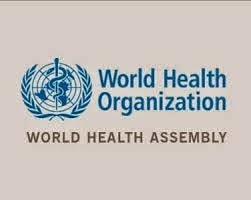 Health Action International was encouraged by the results of the 67th World Health Assembly where more than 20 resolutions were passed on various public health issues. Throughout the week, we delivered four interventions and hosted and attended important side events on access to medicines and related topics. In addition, we launched, with partners, a new global Antibiotic Resistance Coalition.

Here’s a look at our week at the WHA.
Antimicrobial resistance / antibiotic resistance
HAI attended a meeting on antimicrobial resistance (AMR), hosted by the Dutch and United Kingdom (UK) governments. There, we advocated for cross-ministry government action to address the accelerating AMR challenge. The UK government, represented by Chief Medical Officer, Dame Sally Davies, assured attendees that it would roll out ‘across government’ policy coherence in its antibiotic resistance (ABR) action plan. Meanwhile, the Dutch government, represented by Health Minister, Edith Schippers, said that, for now, it will concentrate on including the ministries of health and agriculture in ABR discussions.
Later in the week, HAI and partners, including ReAct, What Next, the South Centre, Public Citizen and Healthy Food Action, launched a new global civil society coalition, the Antibiotic Resistance Coalition (ARC). Founded on a civil society declaration on ABR, which has, to date, been signed by more than 20 civil society and academic organisations and individuals, the Coalition is committed to demanding policy change and action to ensure that a post-antibiotic era does not become a bleak reality.
In our 22 May press release, ARC, which is comprised of civil society stakeholders from multiple sectors on six continents, called on the WHA to pass a critical resolution (Combating antimicrobial resistance, including antibiotic resistance). Further to that, ARC (represented by HAI) delivered an intervention prior to the vote on the resolution, urging the member states to consider a binding framework convention on ABR as part of the global action plan. Other specific points of concern that were raised included:

HAI and our partners were pleased that, as a first step, the WHA passed the resolution, giving the WHO the mandate to develop a global action plan on antimicrobial resistance. We will, however, continue to advocate for policy change and take action on issues to prevent further antibiotic resistance.

Consultative Expert Working Group on Research and Development: Financing and Coordination
A joint intervention between Knowledge Ecology International and HAI encouraged the WHO to move forward on the recommendation of the Consultative Expert Working Group on Research and Development: Financing and Coordination (CEWG) to begin negotiations on a global treaty that would provide a new mechanism to set global norms in healthcare research. This would include ensuring sustainable sources of funding for priority medical research. We also encouraged Member States to expand the scope of the proposed agreement to address the pressing needs for additional research and development (R&D) funding for new antibiotic drugs, better low-cost diagnostics, basic research in areas of particular interest to all Member States, and independent clinical trials to evaluate the efficacy of pharmaceutical drugs.
In the end, the WHA decided to create a new pooled funding mechanism for R&D that will be administered by TDR (the Special Programme for Research and Training in Tropical Diseases). Type II and III diseases, as well as specific needs of developing countries for type I diseases, will be the focus. The WHA also requested an analysis of the innovative components being implemented by CEWG projects. This includes financing, the use of open access models, multi-sectorial research platforms, and de-linkage.
Access to essential medicines
Access to medicines is the cornerstone of health for all. It is imperative, however, for sufficient funding to be made available at the WHO to implement its work in this area. H
AI delivered an intervention calling for sufficient funding for the WHO’s access to medicines department and its programs, warning that, without it, existing and future work in this area will be worthless.
Following extensive discussion, WHA approved a resolution aimed at improving access to essential medicines. The resolution includes numerous actions for governments, such as providing adequate resources for comprehensive national medicine policies, governance of pharmaceutical systems, and coordination of activities. Furthermore, it encourages Member States to implement comprehensive national medicines policies, improve regulation, procurement and distribution of pharmaceuticals and measures to improve access (including availability, affordability and rational use) to essential medicines. Importantly, the resolution also calls on Member States to monitor and report barriers and shortages, and to make better use of TRIPS flexibilities.
WHO framework on engagement with non-state actors
The WHO’s proposed policy to engage the private sector as non-state actors was of tremendous concern to HAI. We delivered an intervention at the WHA, highlighting that the private sector and civil society are not the same and do not always share the same value-based primary interests. If the private sector was considered a non-state actor by the WHO, we said, crucial distinctions between civil society and the private sector could be blurred. We also articulated concerns that the current draft policy on non-state actors did not propose a thorough-enough examination of conflicts of interest and, if implemented in its current form, could lead towards corporate capture of the global public health arena.
Following a lengthy discussion, the WHA decided to consult WHO regional offices on the draft policy. We are encouraged that the Member States are taking concerns about conflicts of interest to heart.
Tags
Print or PDF
Print this page
Download PDF-file