On 19 July, over 150 participants from consumer groups, policy and research bodies, universities and NGOs attended the annual Global Health Conference at the University of Sussex: ‘Pharmaceuticals and Global Health – Inequalities and Innovation in the 21st Century’. It was a pleasure to return to one of Britain’s greenest and beautifully-located campuses, not least when the sun is out and the temperature is pushing 28 degrees Celcius. (Yes, summer really does make it to England!) 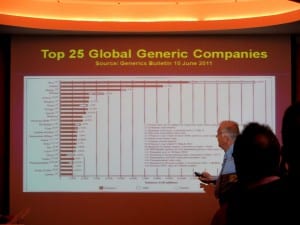 The conference centred around access to essential medicines, launching the day with words on how the defining international AIDS/HIV movement over the recent decades has not only made anti-retroviral therapy (ARVs) available to millions who need treatment, it has also paved the way for a broader global health model, which prioritises worldwide access to health. This was perhaps a discussion that could have been offered more room for debate; do we necessarily agree that the emerging global health model is founded on one single campaign movement, for a cause which (rightly) attracted such a huge media, public and donor following worldwide? Talk to those in the field of rare diseases and I’m not so sure they’re convinced…

Nonetheless, following the opening presentations the day quickly developed to encompass a vast array of cross-cutting issues, including the current lack of innovation in the pharmaceutical field, the ethics of clinical research (particularly in developing countries), direct-to-consumer advertising and the ever enduring intellectual property vs. access conflict of interest. The majority of the day allowed for a wonderful ‘pick-and-mix’ of panel discussions along a range of themes, allowing the participant to sign up and attend those of interest.

New to me was the introduction of ‘nutraceuticals’, a label given to foods that have been supplemented with additional nutrients to allegedly provide greater nutritional value than their ‘normal’ counterparts, and often marketed heavily in developing countries. Personally, during the presentation on the prevalence of such products in Asia, I can’t help but sit in my seat a little uncomfortably as my mind conjures up a picture of the rural poor allocating their precious savings and a few more Rupees from their daily budget in order to buy that sacred cup of (GSK owned) Horlick’s, because it promises to make the kids ‘taller, stronger, sharper’. It left me to question the potential scope for greater research on this new phenomenon; not so much on the popularity of these fortified foods, but rather on their efficacy – and of course the potential ethical wrongdoings implicated in their advertising.

Conveniently for manufacturers, it seems that this emerging hybrid of ‘nutraceuticals’ brings a somewhat fuzzy identity, being neither a pharmaceutical drug nor a regular nutritional product. For example, in the USA, the term ‘nutraceutical’ has no meaning under US law. This begs the question of regulation, and the potential side-stepping of quality, efficacy and safety factors when large pharmaceutical-owned multinationals may seek to create a wide profit margin through such unregulated products. As proudly stated on the GSK website under ‘fun facts’, Horlick’s was first invented as a substitute breast milk, and now in India alone over 2 billion cups of the malty drink are consumed each year. Given the projection by a market research report (2012) that the worldwide nutraceuticals market will reach US$250 billion by 2018, I believe it’s certainly a topic that merits further exploration.

And perhaps that is exactly what a good conference does: invokes more questions than answers, stimulates minds and fresh debates on new topics, and opens up greater areas for inquiry. At the end of the day, the event may have been too varied and its topics too diverse for neat conclusive remarks to be drawn… but I’m fairly sure it succeeded in doing the rest.

The ‘Pharmaceuticals and Global Health – Inequalities and Innovation in the 21st Century’ conference brochure outlining the programme, themes and keynote speakers is available in full here.Tweets from the conference can be reviewed using #Pharmglohealth.